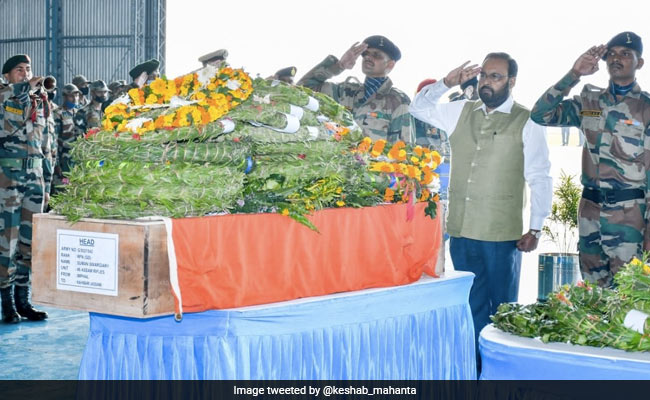 Rifleman Suman Swargiary of 46 Assam Rifles, who was killed in a terror attack in Manipur on Saturday, had a wreath-laying ceremony held for him in Guwahati on Monday.

The remains of the soldier were brought to Guwahati from Jorhat early morning today where Assam Health Minister Keshav Mahanta, accompanied by Assam Rifles personnel and district administration officials paid their homage.

The body of the soldier will be taken from here to his native village, Thekarakuchi Baksa district, where the last rites will be completed.

Terrorists attacked the convoy of Assam Rifles when a Colonel of the 46 Battalion of the Assam Rifles was going to supervise a civic action program in the Churachandpur, bordering Myanmar.

The Commanding Officer (CO) of 46 Assam Rifles Colonel Viplav Tripathy, his wife and eight-year-old son, along with four soldiers were killed in the ambush by terrorists near the India-Myanmar border in Manipur on Saturday. Four more soldiers sustained injuries in the ambush.