Schools In Parts Of Karnataka Shut Amid Heavy Rain, State On Alert 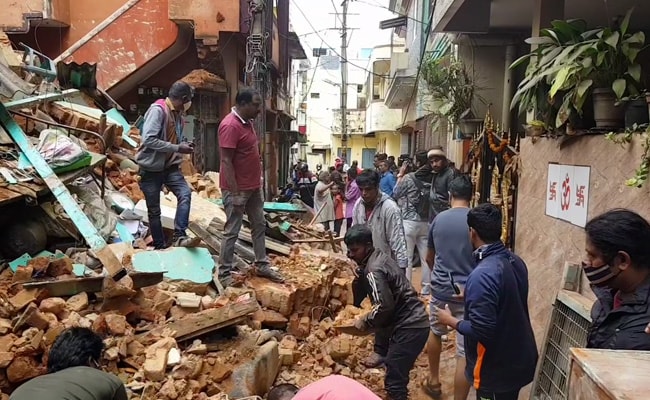 Schools in Bengaluru Urban and in some other districts in south interior Karnataka are closed today due to heavy rainfall forecast. An “orange alert” has been issued for Bengaluru Urban, Bengaluru Rural, Chikballapura, Chikkamagaluru, Hassan, Kodagu, Kolar, Mandya, Ramanagara, Shivamogga and Tumakuru. Chikballapura has closed schools for two days.

Thursday saw heavy rain over the capital city of Bengaluru, with little sunshine for many days now. Temperature has plummeted as the winter chill has set in early this year.

The 50-year-old home of Shankar in Bengaluru’s Ulsoor, where the family has lived for three generations, collapsed early on Friday morning. This followed hours of continuous rainfall from Thursday evening and through the night.

“Around 5.30 am we heard a huge sound and it collapsed. The whole night we didn’t sleep for a single minute,” Shankar, a retired postal worker, told NDTV. Fortunately, nobody was hurt.

“After midnight, around 1 am, we had gone to my daughter’s place next door. Whenever she comes, she stays there. We were in a small room there. By God’s grace, we have survived,” he said.

But important documents and jewellery were in the living room of the house – and that was the part that collapsed. Shankar was hoping the items could be retrieved from the debris of his home. “Everything is there – receipts, government papers, ornaments. Please, that should be retrieved. Each and every paise is hard-earned. That is the principal our parents have taught us.”

J Manjunath, the DC of Bengaluru Urban, spoke to NDTV about the unusually heavy rain and its impact. “We have been seeing rainfall continuously over the last two months. The rainfall since October has exceeded the annual rainfall estimate by about 100 per cent. In the last seven days there is a 634 per cent increase. We used to receive 11 mm of rainfall in these seven days, but we have received almost 80 mm. Last 24 hours is also considerably in excess, almost continuously it has been raining. As a precautionary measure we have closes all the schools in Bengaluru Urban district,” the official said.

The district also has agricultural activity that has been hit. “The district has about 21,000 hectares of agricultural land which was 100 sown. Ragi was the chief crop and was sustained till the last few days. But after the last three days of continuous rain, the ragi crop has fallen. The crop has gone; it can’t be harvested,” Mr Manjunath said.

“Estimation of loss is on. There are horticultural crops. Bangalore is famous for its vegetables and flowers; we export flowers also, but this has been affected. We have grapes, guava and banana also, some of which have been affected by continuous rains.”

Traffic congestion, often an issue in the city, intensifies when it rains during peak hours. Flooding of lower areas of the city has been seen in past years. Bengaluru used to be a city of hundreds of lakes – and many homes and layouts were built on what used to be lake beds. These areas are susceptible to flooding after heavy rain. Encroachment and blocking of stormwater drains is another issue contributing to flooding. The administration over the years has made attempts to clear such encroachments. The civic agency BBMP also attempted to identify buildings that were at risk of collapse.